Carol Matarese has tailgated in the East L parking lot of Scott Stadium for many years. She and her family and friends have gathered together there on Saturday game days before heading in to the stadium to cheer on the Hoos. This year, with the many changes COVID-19 has brought to the schedule, Matarese devised a new plan: “home-gating.”

For the Virginia versus Duke football game on September 26, Matarese set up her television to broadcast the game in her driveway in Keswick, Virginia. Her “home-gate” chairs and blow-up sofa (safely distanced for her friends and neighbors), together with the drinks table, were “orange and blue in full bloom.”

She arranged food in separate containers, sandwiches individually wrapped, and everybody wore their masks when within six feet of one another.

“Our Saturdays are just not the same,” she said. “While we are forced apart and told to remain separate, it is staggering how many people this year have managed to find creative ways to gather. 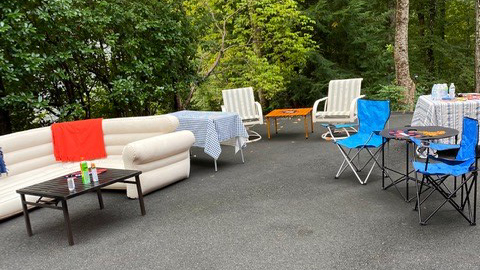 The distanced furniture in Matarese’s driveway, including the famous blow-up sofa seen on the left!

“We need one another during this uncertain time and what better way to support the Hoos than with family and friends?”

She is grateful that Virginia has the opportunity to compete and that, thanks to livestreaming, her family and friends are able to safely watch in their own spaces.

Matarese’s motivation is explained quite simply: “My hope was that the team would actually be able to play a game after all of their dedicated practicing, and also stay safe.”

Bronco Mendenhall’s team has been cross-training in multiple positions in order to have more versatile players in case of the unfortunate occurrence of injury or illness.

Matarese has been a Virginia Athletics Foundation member since 2005 and has had season tickets for both football and men’s basketball ever since. Her daughter Kimberly graduated from UVA in 1997.

“I think it’s great to be a part of something and have an allegiance to it,” Matarese said.

With fewer fans allowed in the stadium due to protocols, it is comforting and uplifting to know that behind the scenes the fans are still there and that they are prepared to go through this much trouble to stand beside and support our Hoos.

In Matarese’s case, “home-gating” proves to be the ultimate alternative.

“Definitely, the blow-up sofa was the hit,” she said. “I take that back … winning was the hit.”

← Getting To Know Continued Success →