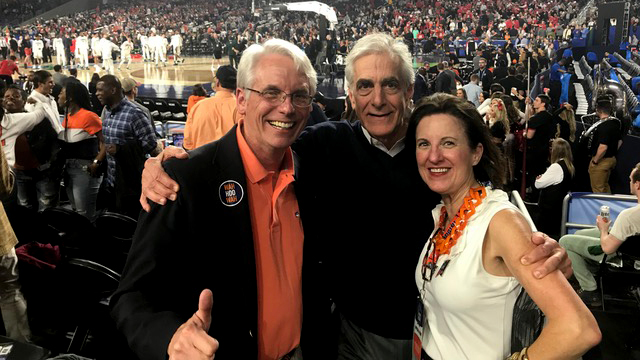 Jim Shannon (Col ’71, Law ’74), a former captain and record holder for the UVA men’s track and field program, is a retired litigation attorney from Richmond, Virginia, and a strong supporter and advocate of the Wahoo athletic program.

After graduating from UVA, he started his own firm, Duane & Shannon, and later was a partner at the law firm Midkiff, Muncie & Ross.

Shannon was president of the Richmond Bar Association and taught a course on professionalism as a member of the Virginia State Bar faculty.

He handled more than 250 jury trials over his 45 years as an attorney and has represented clients in almost every court in Richmond and its surrounding counties.

“I had a good career, not a nationally prominent career, but a strong career that meant a lot to me,” Shannon said.

During his time at UVA, Shannon won two individual ACC track & field titles and also captained the squad in 1971.

As a member of head coach Lou Onesty’s track team in 1968, Shannon and the other three members of the 440-yard relay team — Tom Baker, Ron Shorb and Peter Petit — broke the school record in the event. Shannon also won two individual ACC titles and captained the squad in 1971. He speaks very fondly of his relationship with Coach Onesty.

“Lou was like a second father to me,” he said. “He was the greatest sportsman I’ve ever known.”

Onesty was a trainer before he became head coach of the team, and Shannon admired his compassion.

“It didn’t matter whose team they were on — Lou went over and helped,” he recalled.

Onesty Hall was named for the head coach and stood behind the old University Hall before the renovations for the athletics facilities Master Plan.

“I hope that they name another building after him,” Shannon said. “He’s the kind of person you name buildings after.”

Shannon joined the SPE fraternity at UVA, where he formed precious lifelong bonds.

“Many of my very best friends are my fraternity brothers whom I’ve known for 45 years now,” he noted.

“He and I still tailgate together at the same spot, and that tailgate has not missed a football game since 1974,” Shannon said proudly.

Today, their tailgates are joined by Shannon’s co-captain John Morris.

“It’s really wonderful,” he explained. “Not only do you see the people who come as regulars, but if anybody is coming to town that you haven’t seen in 10 years and he’s able to drop by for a game, he knows where the tailgate is.”

One of Shannon’s favorite experiences as a student-athlete at UVA was building meaningful and long-lasting relationships with mentors around the university.

“I got to know professors, administrators and coaches who really focused on me more than any high school teacher ever had,” he explained.

The relationships formed by students with professors during office hours or over coffee came to be an enriching part of the college experience.

“To live in an environment where people like Ken Elzinga and Gene Corrigan treat you as if their sole purpose is to help you reach your full potential is a real life-forming experience,” noted Shannon, who commends the current UVA Athletics staff and administration as being integral to the University’s reputation and success. “Who can touch Director of Athletics Carla Williams and head coaches like Tony Bennett [basketball], Bronco Mendenhall [football], Brian O’Connor [baseball], Kevin Sauer [rowing], George Gelnovatch [men’s soccer], Lars Tiffany [men’s lacrosse] and Vin Lananna [track and field], to name a few?

“These people, every single one of them, are respected even more for their character than for their athletic coaching prowess.”

Shannon has a great appreciation for the life skills UVA sports taught him and teaches others today.

“Virginia reinforced values of ethical conduct, teamwork, loyalty and perseverance that you need throughout your life,” he said. “I don’t know anything that more efficiently teaches all of those things than athletic competition. That’s why I’m a big proponent of UVA and its athletics program.”

Shannon’s famous tailgate with friends and family in 2015. Shannon (eighth from left) and fraternity brother Ken Knowles (fifth from left) began tailgating together in 1974.

Now retired, Shannon volunteers for the Virginia Dental Association Foundation. The organization’s latest project, Mission of Mercy, sets up clinics in rural areas throughout Virginia four or five times a year to offer dental assistance to those in need. Their work has assisted more than 2,000 people a year who otherwise would not have had the opportunity to receive dental care.

Due to COVID-19 and the industry’s inability to practice, the Dental Association, with Shannon’s help, has delivered unused PPE to rural nursing homes and rescue squads where these resources have been scarce.