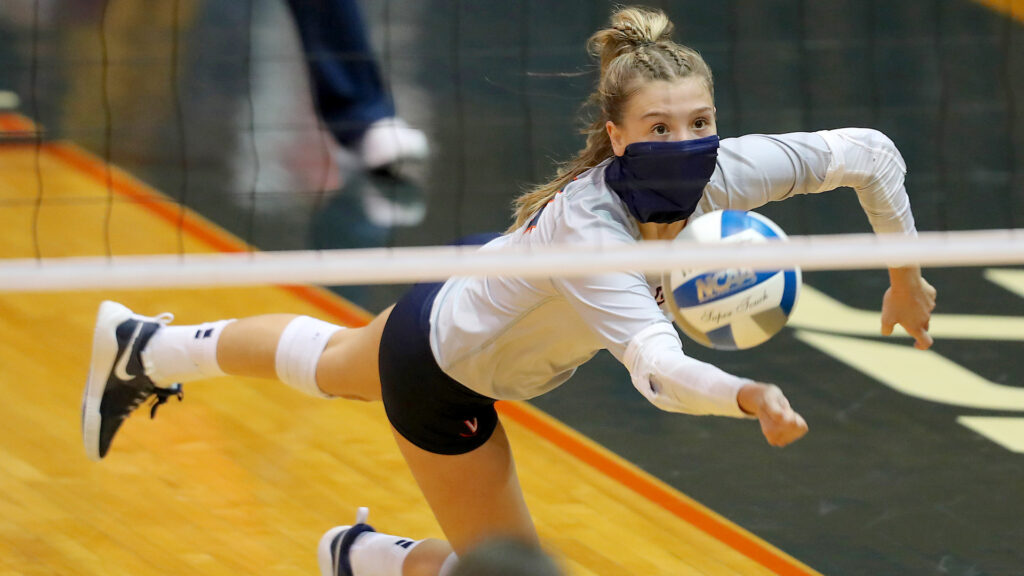 Morey recorded 20 digs against The Citadel in the first match of her Wahoo career and was honored as the ACC’s Freshman of the Week. (Photo by Matt Riley)

Virginia first-year Madison Morey caught the attention of most Cavalier volleyball fans on opening night when she piled up 20 digs in a sweep of The Citadel. The performance was one of the best ever registered by a UVA rookie and marked a promising start to her collegiate career.

“In the moment, I was just playing for the game,” Morey said. “I love the game so much, and I just was out there balling with the people I love and just diving on the floor.

“It’s so much of an adrenaline rush, and I was just looking forward to being on the court.”

Morey said she knew she had performed well and was proud of her first collegiate outing. The magnitude of exactly what type of performance the rookie had achieved truly set in once she returned to her room following the match.

“I think it really hit me once I started seeing more recognitions from other people, like NCAA volleyball,” Morey said after one of her digs appeared on the NCAA’s official social media channels. “I think that just fired up a place in my heart to push myself to become even better and push myself to break records and start records. The attention has just pushed me to be a better teammate.”

Volleyball has always been a family affair for Morey, who learned the game in her front yard as a kid from her parents, Tim and Kristin.

“I started in third grade, and my parents were always big on volleyball,” she said. “They both play volleyball, and we always peppered in our front yard and had so much fun just goofing around. Then it became more serious once I started getting into club ball.”

Morey credits her coach at Walton High School in Marietta, Ga., and club coach at A5 with taking her skills to the next level. The 16U AAU All-American then found the family atmosphere she wanted at Virginia.

“I think it all started when I came up on Grounds for the first time,” Morey said. “The coaching staff and team were super welcoming, and I enjoyed every minute of my visit. I fell in love with Grounds and the family aspect here. That’s when I knew I wanted to be at Virginia.”