Female Athlete Of The Year 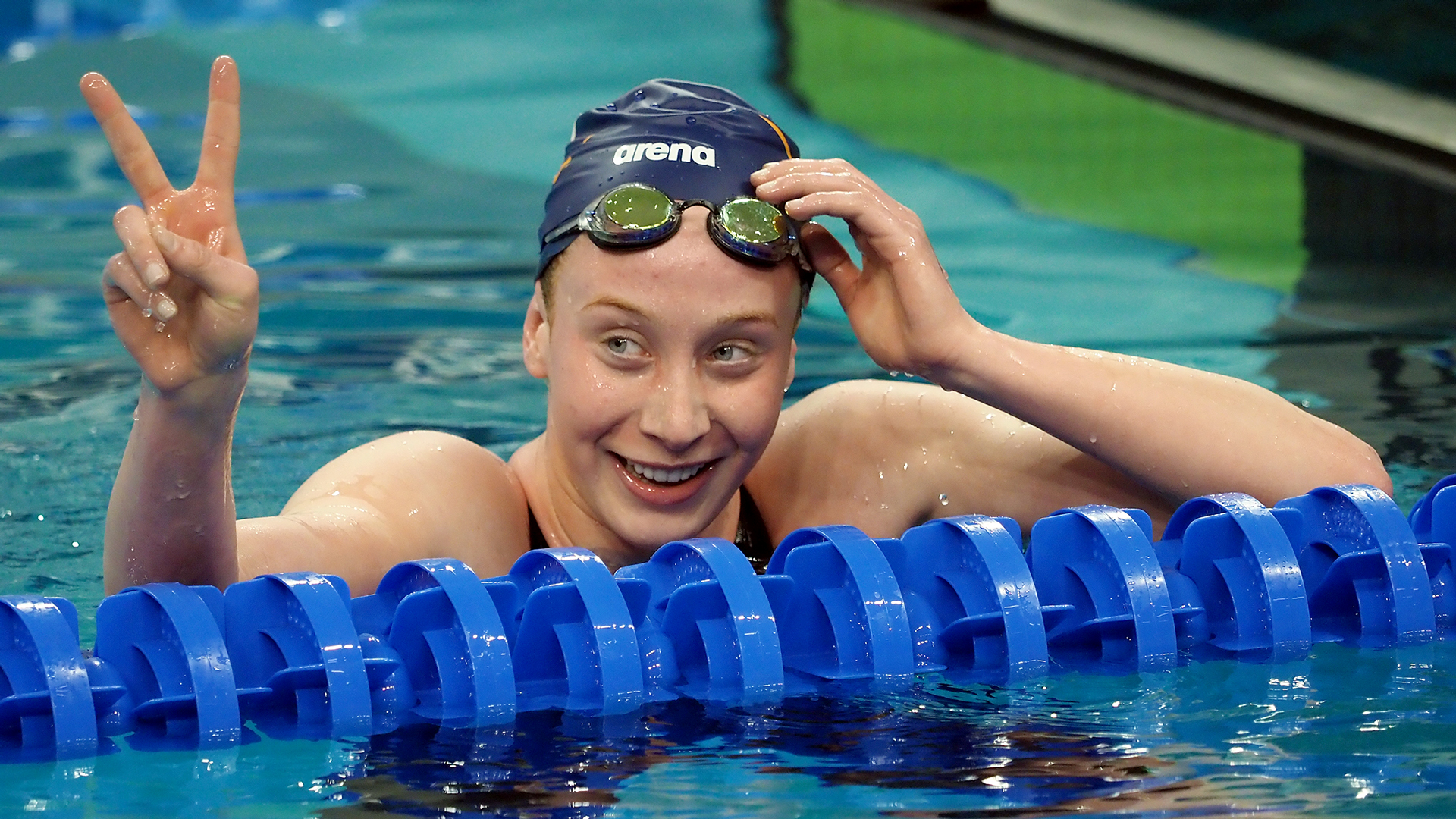 Madden was named the ACC Swimmer of the Year and Most Valuable Swimmer at the ACC Championships, after winning five conference titles to power the league champion Cavaliers. (Photo courtesy UVA)

The Virginia women’s swimming and diving team raced out to the program’s 16th ACC championship in 2020 — tallying the most points by a team in the history of the league championship — thanks in part to a selfless decision made earlier in the season by third-year swimmer Paige Madden.

A four-time All-American and three-time ACC champion heading into her third year, Madden decided to forego competing in the 200 backstroke for the 2019-20 season. It was an event in which she had previously won an ACC championship and earned All-America honors (2019). But the junior from Mobile, Ala., saw that her team needed someone to compete in the mile and stepped up to answer the call.

The decision wasn’t hard for Madden.

“The main thing was the depth for backstroke in the ACC and in the NCAA is very strong, and a lot of people don’t want to swim the mile,” Madden said. “I knew I could score more points to help my team in the mile.

“It’s not a fun event, but I knew I could be good at it considering I had dropped a bunch of time in the 500 freestyle the year before.”

“It’s a grueling event,” DeSorbo said, “which meant swimming a race that was eight times longer than the event it would replace, but she offered to do it if the team needed her to. Additionally, she didn’t have a lot of experience in the event, but she was willing to race for her team. Our coaching staff knew she would be successful at the race, and we wouldn’t have put her in that position if we hadn’t been confident that she could at least challenge for an ACC title.

“As coaches, we want to put each individual athlete, and thus the team, in the best possible position to score as many points as we can so we can win the team championship. We knew Paige had the ability, talent and toughness to transition into this race and be successful.”

Madden didn’t alter her training for the mile, pointing to the fact that in preparing for her other four events she already put in lots of laps and yards. Instead, she kept swimming the 200 backstroke because she felt it helped her performance in her other events.

The decision paid off — she was named the ACC Swimmer of the Year and Most Valuable Swimmer at the ACC Championships, after leading the way with 96 team points. It also helped the Cavaliers tally the most points ever scored in the ACC Championships (1,492.5) and earned them the top seed for the NCAA Championships, though the event would later be canceled due to COVID-19.

Madden garnered All-America honors in five events last season: the 200 free, 500 free, 1,650 free, 400 relay and 800 relay. She had claimed ACC championships in all five events while helping to power her squad to the team title.

“It’s a grueling event, which meant swimming a race that was eight times longer than the event it would replace, but she offered to do it if the team needed her to. Additionally, she didn’t have a lot of experience in the event, but she was willing to race for her team.”

— UVA head coach Todd DeSorbo on Madden deciding to swim the mile, a race in which she eventually won the ACC title

She also received recognition at home, being named the recipient of the IMP Award for Outstanding Female Athlete at the Hoos Choice Awards.

“It felt good, but I was a little surprised,” Madden said, though she was quick to point out the successes of her teammates. “Even though I scored the most points on the team, I wasn’t necessarily the best swimmer.

“Kate Douglass, a freshman, shattered the school record in the 200 IM and was set up to break the American record in that event.”

Despite that acknowledgement from her peers, Madden said being named the ACC Scholar-Athlete of the Year was perhaps even more gratifying.

“I was really surprised, but I am probably most proud of that because I have always valued the balance between swimming and academics,” Madden said. “I’m not going to swim my whole life, so it was nice to be recognized for that aspect. So much of my identity is who I am as an athlete, and being recognized for academics was nice too.”

Coming from a family with strong professional ties to medicine, Madden has an eye on a future career in medicine herself. However, for now, she’s focused on the upcoming season and training for the Olympic Trials.

Madden acknowledges the 2020-21 season has some uncertainty with continued cancellations due to COVID-19, but she said the lessons learned from the experience in the spring and challenges put forth by the coaching staff are helping maintain perspective and focus.

“It took a while to understand [the spring cancellation] because we were so excited, and it’s unfortunate the fourth-years didn’t get their final chance,” Madden said. “For the third-years and underclassmen, we didn’t get to show our cards, and we’re fired up to take advantage of any opportunity. We learned things won’t always be there, and they can be taken away.

“Every day now things are changing. The Pac-12 and Big Ten pulled out of fall football, which isn’t great news. We’re preparing mentally for what would happen if the season is canceled, and physically we’re preparing for it to happen.

“It’s hard on the fourth-years because their careers could be over. We’re staying motivated and leaning on each other. We’re trying to feed off each other, having conversations and just being honest [about potential scenarios].”

As for the goal of qualifying for the Olympics, which have been delayed until the summer of 2021 in Tokyo, her coach has no doubt she has the ability to make the dream a reality.

“I know her goals are to win an NCAA title and make the U.S. Olympic Team,” DeSorbo said. “She is capable of both, and has shown the commitment and discipline to be able to accomplish those goals.

“If she falls short, it certainly won’t be for a lack of preparation. Having an extra year only helps Paige. She has continuously improved year to year, and the extra year just puts her in an even better position.”