Male Athlete Of The Year 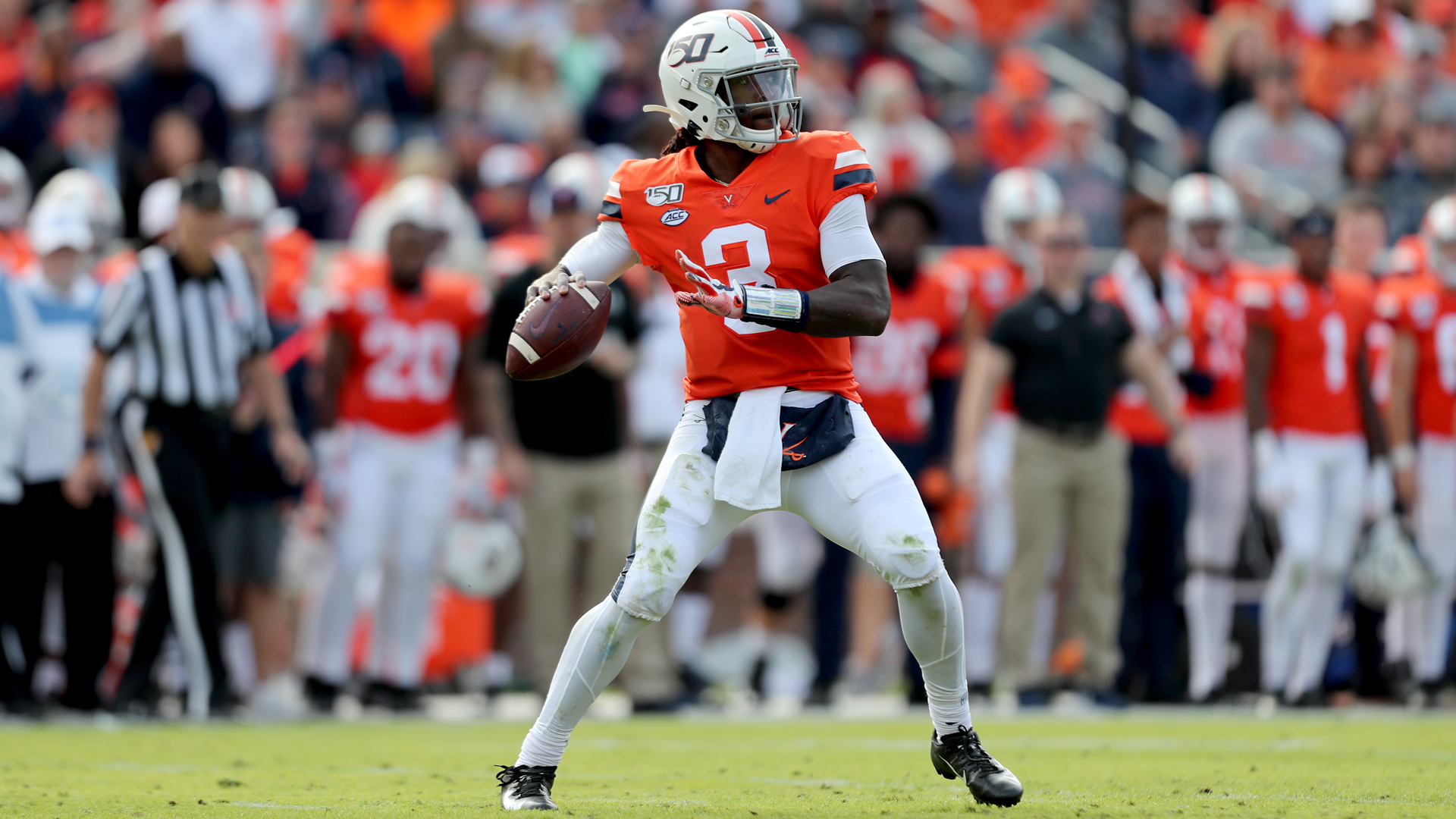 In 2019, Perkins and Oklahoma’s Jalen Hurts were the only two players in the Football Bowl Subdivision to amass 3,000-plus passing yards and 700-plus rushing yards. (Photo by Matt Riley/Courtesy UVA)

As the seconds ticked off the clock that memorable November day, a multitude of Wahoos stormed the grassy gridiron at Scott Stadium. Starting at midfield, UVA quarterback Bryce Perkins was swept up in the current of orange and blue, riding the celebratory wave toward the Virginia locker room located near the south end zone.

In front of a live national television audience on ESPN, Perkins found head coach Bronco Mendenhall in the scrum and the two shared an embrace of joy and jubilation across the Virginia diamonds painted on the grass beneath their feet. Perkins and the Cavaliers had just defeated Virginia Tech for the first time since 2003, notching a 39-30 triumph to close the 2019 regular season and clinching the ACC Coastal title in the process.

Perkins put the Cavaliers on his back, passing for 311 yards and one touchdown while also rushing for 164 yards and two scores. In the end, the Cavaliers’ defense shut the door late, leading to celebratory chaos in Charlottesville.

“It felt like a movie scene [at Scott Stadium],” Perkins said. “It was like at the end of a movie when your team makes it to the championship after all the heartache, the hard workouts and the tragedies during the season. Finally you come to the last game and you hear that championship theme song in the background. That is what it felt like.”

There was a lot of celebrating for the Cavaliers in 2019, with UVA boasting for the first time the ACC Coastal champions moniker while also making its first-ever appearance in the Orange Bowl. It marked the first New Year’s Six bowl game for UVA since the College Football Playoff started in 2014.

“Every time I go on the field, I try to always give it my all. I give my whole heart and soul on every play. I want to let my teammates know I am playing for them.”

Leading the charge was Perkins, the All-ACC quarterback, who also was awarded his second straight Billy Dudley Award as The Richmond Times-Dispatch’s State Player of the Year and was bestowed UVA’s WINA Male Athlete of the Year Award.

In 2019, Perkins and Oklahoma’s Jalen Hurts were the only two players in the Football Bowl Subdivision with 3,000-plus passing yards and 700-plus rushing yards.

Perkins left UVA tied with Matt Schaub for No. 2 all time with 17 quarterback wins, No. 3 with 47 career passing touchdowns, No. 1 in quarterback career rushing with 1,692 yards, No. 2 with 16 career games of 200-plus passing yards and No. 3 with five career showings of 300-plus passing yards. In his final game for Virginia, he set a program bowl record with four passing touchdowns against Florida in the Orange Bowl.

But it wasn’t the personal records that Perkins reflects on immediately when looking back on his two years in Charlottesville.

“Every time I go on the field, I try to always give it my all,” Perkins said. “I give my whole heart and soul on every play. I want to let my teammates know I am playing for them.

“After my two years of playing at Virginia, I am glad that we as a team have accomplished the things that we did, like breaking a streak [versus Virginia Tech] and getting to consecutive bowl games, winning a bowl game, going to a New Year’s Six bowl game. It feels great to accomplish those things, but how we did it is what really matters with our chemistry and our culture that was set by Coach Mendenhall.”

Perkins, who comes from an NFL pedigree, is in training camp with the Los Angeles Rams this fall. For the first time since high school, he has cut his signature hair and is wearing an unfamiliar No. 5 jersey as he embarks on the next step in his career. He is excited and prepared, and he credits his time at UVA for helping him during his journey.

“I make sure I come every day after practice and meetings, and translate everything I have learned that day and go over it, go over it and go over it,” Perkins said. “I can look at something and see something and understand what it means. Doing things like that are a study habit and ability that was nurtured during my time at UVA.

“That has helped me tremendously once I got to this level.”

Perkins was born in San Diego and raised in Arizona, so playing on the West Coast has been an added blessing during this next step in his career.

“I was happy when I got a chance to join this team and be on the West Coast,” Perkins said. “The first place I stopped at when I got out here was In-N-Out Burger, which is right next to where I am staying. I took advantage of that.”

Perkins’ roots will always be out West, but for a brief blink of the eye he called Charlottesville home. No matter where his story may take him, he will always be a Cavalier, a son of Virginia and a graduate of the University with honors who proudly donned that orange and blue.

← Female Athlete Of The Year Year In Review →