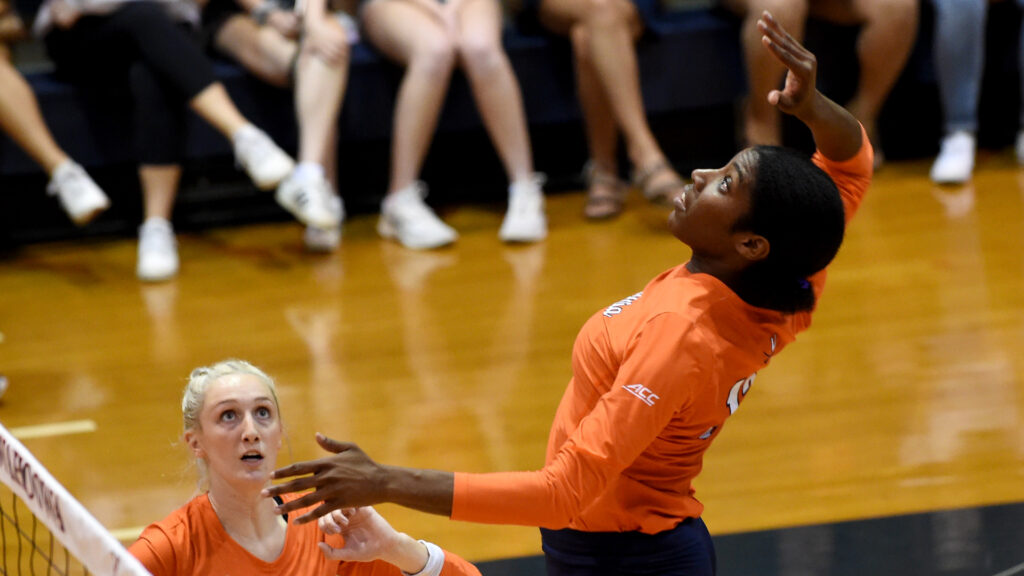 Last year, Matthews set the UVA first-year record for hitting percentage (.382) and posted the fifth-best mark for a rookie in blocks per set (1.00). (Photo courtesy UVA)

For second-year middle blocker Mattison Matthews volleyball has always been a family affair. The youngest of four girls, she grew up in the gym watching two of her older sisters play the sport. In addition, her cousin Benavia Jenkins was part of two Final Four appearances during her playing career at the University of Florida and now leads one of the most successful mid-major programs in the country at East Tennessee State.

“My whole family is competitive,” Matthews said with a laugh. “It’s literally genetic. We compete in everything. My sisters played volleyball in high school, they played all the sports, so I was always at the games and just around volleyball. I guess I was the annoying little sister at the games.”

After carving out quite the high school volleyball career herself, which included five all-state selections and a pair of player of the year honors, Matthews took that competitive spirit to Grounds where she etched a pair of top-five marks in the Virginia record books. Her .382 hitting percentage is the best by a first-year and the second-best mark by any player in program history. Defensively, Matthews was equally stellar, averaging a block per set in her inaugural season to rank fifth all time among first-years at UVA.

“I just came into the program wanting to play volleyball,” said Matthews. “I didn’t know what would happen. That was the unexpected gift for me, and I don’t really know how to explain it, but it was really nice.”

When she joined the Cavaliers, Matthews found a new source to spark that competitiveness in fellow middle blocker Milla Ciprian, who a year prior posted a record-setting first-year campaign herself.

“Our mentality in practice is to have fun,” Matthews said. “At the same time, we’re competing at the highest level. It’s a very competitive atmosphere in the gym, and I guess that helped. It also helped how seamlessly I fit in with the team. It didn’t feel like I was going into my first year; it felt like I have been here for years.”

Following her impressive first season with the Cavaliers, Matthews knows there is much more to come, whenever it may be.

“My expectations are pretty high. I just want to be at a level where I can help my teammates.”