England native Nathaniel Crofts didn’t know anyone in America when he came to UVA, but is now a team Captain with Pro Aspirations

Growing up in Sheffield, England, Nathaniel Crofts playing soccer at an early age was not a surprise. The opportunities are abounding, and it really is a part of who you are in Europe.

“I played at the academy level most of my career growing up in England. I think I was around 8 or 9 when I started,” Crofts said. “There are always opportunities to play. There are parks open, and the centers are there. For me, there is a community center near my house, and I would go there to play with my friends.

“It is huge — everybody wants to play soccer growing up. You ask your kid what they want to do, and they say, ‘I want to be a professional.’ It’s in the genes.”

When it came time for Crofts to graduate from high school, he had to decide if soccer would continue to be a part of his life.

“I was in panic mode at the time because after being released from Sheffield United, I had to make my mind up if I was going to be staying at school and stopping soccer altogether or trying to find somewhere to play,” Crofts said. “Luckily I had a friend that talked to me about the agencies that send players from England and Europe to America. That’s how I found the path and came to Virginia.”

Unlike players in the U.S. who can have coaches attend their games, Crofts had to seek out chances to play in front of scouts to be recruited.

“The agency that I went to put on a showcase,” Crofts said. “They set up the game, and I just had to prove myself to the scouts. They would also watch my videos.

“At the time, obviously, I didn’t really know too much about the school, even which division was the best and stuff like that. It was all new to me. Luckily the recruiters at UVA made it stand out, and that’s why I chose it.”

Crofts made the move across the pond on his own, without knowing a single person. Once he arrived, he was surprised by what he noticed.

“It was a culture shock,” Crofts said. “I had always seen on the news and the television in England how America is. When I finally stepped foot there, it was very different.

“One major thing is just everything’s bigger — the stars are on a way bigger scale compared to England.”

In his three years in America, Crofts has seen soccer grow across the country.

“Last year we had a great team, and I’ve seen players leave and make the transition to the MLS [Major League Soccer]. To see that happen has helped me, and I look forward to hopefully having the same experience.”

“Last year we had a great team, and I’ve seen players leave and make the transition to the MLS [Major League Soccer]. To see that happen has helped me, and I look forward to hopefully having the same experience.”

Voted team captain, Crofts is the top returning scorer on the Virginia men’s soccer team that reached the national championship game a season ago before losing to Georgetown in overtime on penalty kicks.

“The spotlight is kind of on me now as a returner,” Crofts said. “I don’t really put pressure on myself like that. I just like to get out on the field and let my performances do the talking. Hopefully, we can keep up the success.”

Coming off the heartbreaking finale last season, Crofts knows that he has to help keep the team focused on what they can accomplish this season, even if it will look a little different.

“The response from the team has been great, straightaway from day one in preseason,” Crofts said. “We say, ‘What’s done is done. The past is in the past.’ Right now, in the present, we have to just keep improving each day, which we are, and hopefully we go one win further this year.

“We had a longer preseason this year and to finally get on the field feels great. You can see it in the squad, and everybody was hyped for it.”

After several game cancellations and a postponement, UVA opened the season on October 9 with a 2-1 win over Louisville in double overtime. A tie with Virginia Tech and a 3-2 overtime loss to No. 2 Pittsburgh followed. 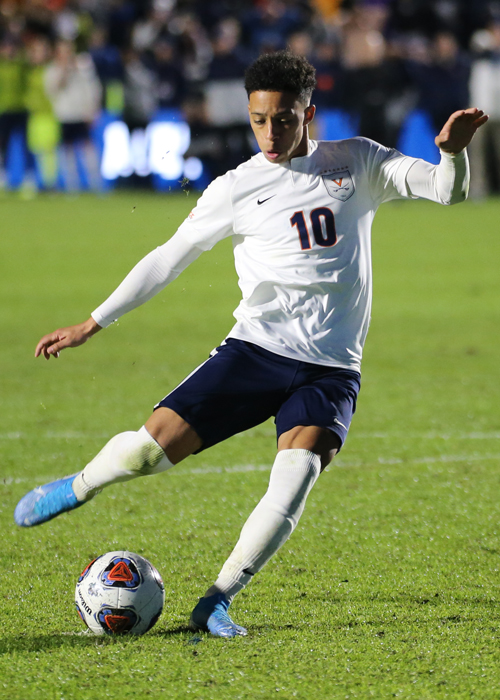 Crofts tied for second in the ACC last year with five game-winning goals, including one that made SportsCenter’s Top 10 Plays. (Photo courtesy UVA)

The fall season will end with the ACC Tournament in mid-November, with the winner getting an automatic bid to the NCAA Tournament. The spring season will start in early February, conclude in late April and be followed by the national championship tournament.

“With the games being moved, it definitely gives us more time to practice as a team,” Crofts said. “I think we’re playing about once a week now. That really helps us recover as well because normally we play two games a week, which is a lot. The schedule is more spaced out so we can have time to watch film and recover.”

Now that the soccer season will span fall and spring, Crofts will have more time to grow and train for life after college.

“Hopefully, we can continue to have a good season,” Crofts said. “I want to keep my head down and grind, and hopefully become a professional by the end of the year. I’ll take any opportunity right now.

“My goal would be to go back to Europe eventually, but if it means staying in America for the MLS that would be great too.”

Even if he doesn’t go back to England right away, Crofts still helps players who are looking for opportunities to play college soccer in the United States.

“I have a few coaches reaching out to me and asking me how I am doing because there are kids that want to try and come to America like I did,” Crofts said. “They’re interested in the process, and I try and guide them.”