As a first-year, Ordonez netted 15 goals with five game-winners for a Wahoo team that was undefeated in the regular season. (Photo courtesy UVA)

Diana Ordonez, a second-year on the Virginia women’s soccer team, burst on the national scene last year, scoring 15 goals and tallying 34 points to help pace one of the most prolific offenses in the country over the past decade.

Her 15 goals tied with teammate and All-American Meghan McCool last year to lead the ACC and were also tied for the lead in goals scored nationally by a first-year. She garnered All-ACC honors after posting five game-winning goals and helping lead the Cavaliers through an undefeated regular season with a No. 1 ranking for most of the year.

Her start at Virginia came a little earlier than most. She graduated high school early and enrolled for the 2019 spring semester — a plan that was in place when she was originally committed to Texas A&M, and one that her father insisted she carry through with when his daughter changed her mind and signed with the Cavaliers.

Ordonez enrolled in January and began the process of acclimating to life as a college student and finding her role with the team. It was an adjustment, but one that was made easier with the support of her soccer family.

“School was hard because I’d come from being home-schooled,” Ordonez said. “I was not used to being back in the classroom. I was taking college-level classes and I was 17 at the time, so that was pretty tough.

“In terms of soccer, I feel I was as ready as I could have been at that point. I was excited to just jump in with the team. They were really inviting, and they were really helpful when I maybe had a bad practice or things weren’t going my way.

“It wasn’t like I was the new kid messing up. They wanted to help me be better.”

Ordonez credits that early start with her ability to have so much success as a first-year.

“I think it gave me an edge, and I was able to get comfortable and get through the emotions of first practices and things like that. I was able to jump into the season comfortably, rather than still having to find my way to a spot,” she said.

Ordonez raced out of the gates in her debut, tallying four points with a goal and two assists in the season opener against UC Irvine.

She continued that pace with goals in her first five games, a feat only accomplished once before by a Virginia first-year when Makenzy Doniak did it in 2012. Doniak would go on to be named the ACC Offensive Player of the Year in 2015 and set program records for goals scored (64) and points (164).

After the fast start, teams began to adjust their approach to handling the 5-11 forward, but it was a task made more difficult because of the added scoring threat of the fourth-year McCool on the front line with her.

The presence of and friendship with McCool helped Ordonez as the season progressed. The two originally played the same position, a fact that wasn’t lost on Ordonez when she arrived and admittedly made her nervous. Head coach Steve Swanson saw the benefits of both players being on the pitch at the same time and worked to get them in positions that played to each player’s strengths.

“I am really happy with the way I’ve been playing up to this point. I may not have as many goals to show for it as I did last season, but soccer is not just scoring goals.”

— Ordonez on her play this season

The friendly competition that emerged became one they could laugh about as the season progressed and the goals continued to come for both players.

“We obviously knew about Diana’s strengths as a player prior to her arrival, especially in terms of scoring goals,” Swanson said. “The question really became, how can we find a spot where both of them can play to their strengths?

“I think both of them had to adjust a little bit, which is another reason why the spring was so valuable to Diana. They really complemented each other throughout the 2019 season.”

“It was fun,” Ordonez said. “The competition was not where we were going to risk chances just because we want to score more than each other.

“But when we were around 12 and 13 goals, then we would start kind of laughing about it after one or the other scored a goal. I think it turned out all right how we scored the same amount.”

As the 2020 season approached, Ordonez was named a preseason All-ACC selection with third-year Alexa Spaanstra. She also noticed that articles continued to be written about her performance as a first-year and questioning if she would be able to avoid a “sophomore slump” for the Cavaliers.

While she didn’t understand the immediate assertion by people that a slump in her second season should be expected, she recognizes that teams will focus on her and that scoring isn’t the only thing she brings to the pitch.

“I am really happy with the way I’ve been playing up to this point,” Ordonez said. “I may not have as many goals to show for it as I did last season, but soccer is not just scoring goals.

“I’ve played better in these last few games than I have in all my time here, whether I scored a goal or I didn’t. I’m happy with the way that I’m playing right now. And I feel like I’m still contributing to the team, even if it’s not scoring a goal every game.” 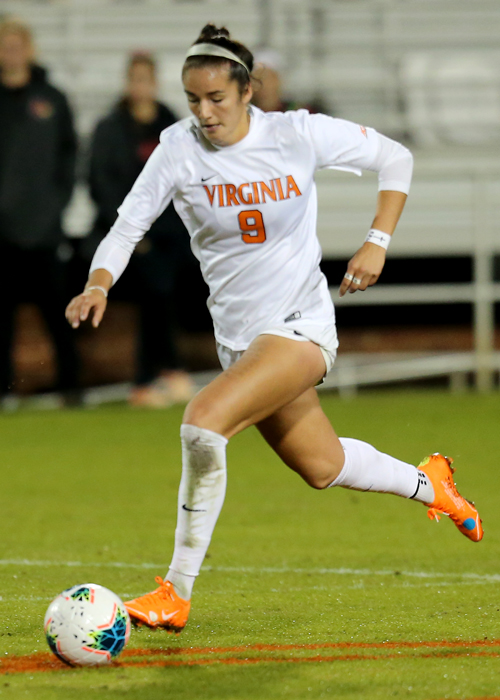 Ordonez tallied three goals and one assist in Virginia’s first eight contests, helping the Cavaliers to a 5-2-1 record and No. 10 national ranking. (Photo courtesy UVA)

It was a point that was hammered home at Clemson this season when the Tigers made her the focus of their defensive effort.

“When we gathered together as a team [at the first stoppage in play], it was clear that I probably wasn’t going to be the one open the whole game,” Ordonez said. “We were telling people we could change positions as much as possible, or I could be a decoy and take people out of the picture so that someone else could get in and take a shot.

“That’s something we’re getting better at. We identify who they are going to mark heavily and then try to get people who aren’t marked in the box to score.”

Through eight games, Ordonez had scored three goals and added an assist to help Virginia compile a 5-2-1 mark and No. 10 national ranking heading into an Oct. 29 contest at Boston College.

And while Ordonez acknowledges she shifted her personal goals for the season with the changes to the schedule during the ongoing pandemic, she hasn’t let it change her approach to the game. She also reflects on some advice from Swanson she received in her first season.

“Steve always makes the point that we are in our bubble,” Ordonez said. “Anything, whether it’s pressure or any sort of talk, that’s from outside of our team bubble is not worth it.

“It’s not pressure he’s putting on me; it’s pressure from other people. He just reminded me that if it wasn’t coming from inside of our bubble, then it probably wasn’t important enough to have to weigh on my shoulders.”