The Right Kind of Super-Spreader 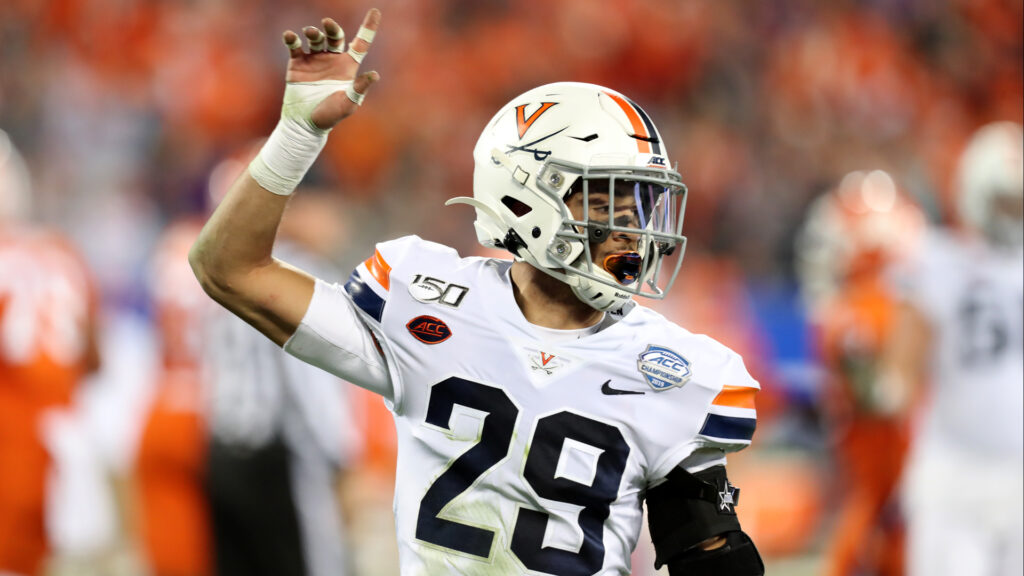 Blount recorded 95 tackles, 3.5 sacks and three interceptions on his way to third-team All-ACC honors in 2019. (Photo by Matt Riley/Courtesy UVA)

In today’s world, being known as a super-spreader is a rather dubious distinction. But that’s exactly what Virginia fourth-year safety Joey Blount is. He is unusually contagious, but not as a virus carrier. It is his passion and emotion on the field that have spread rapidly among his teammates.

“Joey is someone who wears his heart on his sleeve when he plays,” fourth-year wide receiver Terrell Jana said. “He is all-out all the time. His energy is contagious. A lot of times, it is not him giving a speech or being vocal, it is him playing with energy and getting fired up and showing love to his teammates.

“His main thing is having a great presence on the field. Having him back out here at practice, you can tell a difference with the DBs.”

Last winter, while the Cavaliers went through conditioning drills and prepared for spring ball, Blount watched from the sidelines. He was rehabilitating from shoulder surgery and would have been limited during spring practice if it had been held. Now fully healthy, Blount is back in the UVA secondary, taking on a larger leadership role in what he calls his “final tour.”

After a handful of defensive backs suffered season-ending injuries during the course of the 2019 campaign, Blount found himself surrounded by fresh faces on almost a weekly basis. He took it upon himself to up his leadership role on the team.

“You try and build that trust during the week with the person playing next to you,” Blount said. “I had to put it upon myself to be the leader back there. I just tried to work with the guys next to me and build their confidence and help them play to the level they needed to play to during their time on the field.

“The one thing that is unquestioned about Joey is that he is very passionate about what he does. That is a quality to feed off of. When he brings energy, everybody feeds off of it. As a leader, that’s a great quality to have.”

“I think we did the best we could last year with what we had.”

Indeed. The Hoos produced a 9-5 season highlighted by winning the ACC’s Coastal Division for the first time and defeating Virginia Tech to end a lengthy losing streak in the series. But the mounting injuries took their toll when the depleted Cavalier secondary surrendered 713 passing yards and five touchdown passes to Clemson and Florida in the postseason.

“Last year was last year,” Blount said. “It was a cool experience to be in. Now that we have had a taste of that level of play, that level of success, we want to be better than that, if not get to there again.

Blount had his best campaign as a Cavalier in 2019. He picked up third-team All-ACC honors and was second on the team in tackles (95), to go with 3.5 sacks, three interceptions and six passes defended.

In the Cavaliers’ season-opening win at Pitt, their first victory in the Steel City, Blount was picked by head coach Bronco Mendenhall to break the rock after the game. That act took on special meaning for Blount.

“Pitt was a team I had hurt my ankle against [in 2018] that resulted in ankle surgery,” Blount said. “It was really emotional for me to play them again in the first game of the season. For me to be called to break the rock, it felt great, but I did it more for the team and Coach than myself.”

Blount makes no apologies for wearing his emotions on his sleeve. He said it is a family trait.

“I guess it comes from my connection with my parents,” the native of Atlanta noted. “My mom and dad are very emotional and passionate people. We’ve always been up front and unafraid to express how we feel. That relationship with my parents kind of trickled down to football and my passionate play.

“Sometimes I do let my emotions get the best of me, but it has helped to bring me to where I am today, so I can’t be mad about it.”

Those family ties also helped to land Blount at UVA. His father, Tony, was a standout safety for the Cavaliers from 1976-79, once bringing back an interception 69 yards, one of the longest returns in program history.

Set to play in his 39th game when the Cavaliers open the 2020 season, Blount has five career interceptions and a whopping 194 career tackles. His teammates are quick to point out that those numbers are possible thanks to some outstanding traits that serve him well on the football field.

“Joey is fearless,” Jana said. “He is not the biggest guy. He is not the fastest guy. But his instincts at the safety position are unmatched with his reaction to a trigger on the run or getting to the deep third.

“Physically, he is not the best player out there, but when it comes to just being a baller and being a football player, I think he is unmatched.”

“He has an aggressive mindset and wants to make the play. It does not matter if you are big or small; if you have the mindset, that’s all that matters.”

Playing with passion also means a lot to Blount.

“I think it is a good thing to be emotionally connected to the people around you,” he said.

Emerging quarterback Brennan Armstrong explained that, despite playing on the other side of the line of scrimmage, even he’s been affected by Blount’s approach.

“He has a lot of passion about football,” Armstrong noted. “Hanging around him a lot, he just wants to be the best. He kind of brings that out in me, too. He motivates me to be the best I can be.”

“The one thing that is unquestioned about Joey is that he is very passionate about what he does,” Cross said. “That is a quality to feed off of. When he brings energy, everybody feeds off of it. As a leader, that’s a great quality to have.”

Even if it makes you a super-spreader.