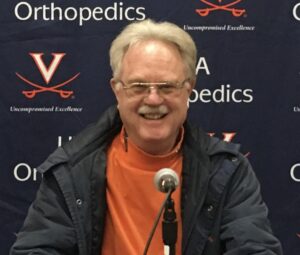 Bunker is an avid fan and supporter of Virginia Athletics, and has season tickets for four sports. Photo courtesy Wally Bunker

Wally Bunker is a sports enthusiast. Growing up, he developed a passion for soccer and played the sport competitively for nine years. Like most sports enthusiasts, he also has his loyalties and the Hoos top his list. In fact, he has season tickets for four sports.

Bunker got his first taste of Virginia football in 1994 when some friends took him to a game against Maryland.

Five years later, Bunker retired from the Suffolk, Va., Police Department and moved to Culpeper, where he began working as a reporter for The Culpeper Star-Exponent.

“The newspaper had season tickets and I’d occasionally go to a football game,” Bunker recalled. “In 2003, I went in with some friends and bought season tickets, and I’ve been getting them ever since.”

But it didn’t stop there.

“My girlfriend, Sue Hamm, likes women’s basketball and we frequently attended games at the end of Debbie Ryan’s coaching career,” he continued. “Nine years ago, we purchased season tickets for women’s basketball, and we go to all the games.”

When Bunker “got tired of watching [his] Washington Redskins lose another game,” he and Hamm decided to go to Charlottesville to watch the women’s soccer team.

“Sue knew nothing about soccer. We played Clemson and won,” Bunker recalled. “That was seven years ago. She liked it so much we went to every game the rest of the season.”

“I really fell in love with the women’s soccer program,” Bunker said. “Coach Steve Swanson, the staff, and players are top notch.”

“People forget the wording,” he noted. “It’s ‘student-athlete.’ Student is the first word in that phrase for a reason. It’s really heartening when you get emails announcing that so many of these kids are All-ACC Academic members.

“They are going to be successful in life because that UVA degree means something. So I started donating to the VAF. You need that education; there is life after sports.”

Bunker is also a Legacy Scholarship donor for women’s soccer and believes the Athletics Department has made great strides over the last decade.

“Craig Littlepage made an incredible hire in Tony Bennett,” Bunker said of the UVA men’s basketball coach. “You don’t find anybody with higher character and integrity. He’s amazing at what he does and how he does it. The football program has gone to three straight bowl games. The men’s basketball and lacrosse teams have won national championships.

“The Virginia Athletics Master Plan is quite something in its vision. It’s how Virginia strives to be a major voice in the college athletics world. The softball stadium is going to be beautiful when it’s done.”
Bunker is excited about the future of Virginia Athletics.

“The University is on the rise,” he said.

However, big-time college athletics in 2020 require big commitments from its supporters.

Several highlights stand out in Bunker’s memories of watching Virginia sports over the years, one being the top-ranked women’s soccer team’s 1-0 overtime win over unbeaten Florida State in 2013. Another fond memory is the women’s basketball team’s 69-64 overtime win over Pat Summit and Tennessee in Joanne Boyle’s first season as head coach.

His top moment? Virginia men’s basketball’s 65-63 win over Duke in Cameron Indoor Stadium in 2018, the Hoos’ first triumph in Durham in 23 seasons.

“That win at Cameron was probably one of the coolest games that I’ve ever been to,” Bunker said.