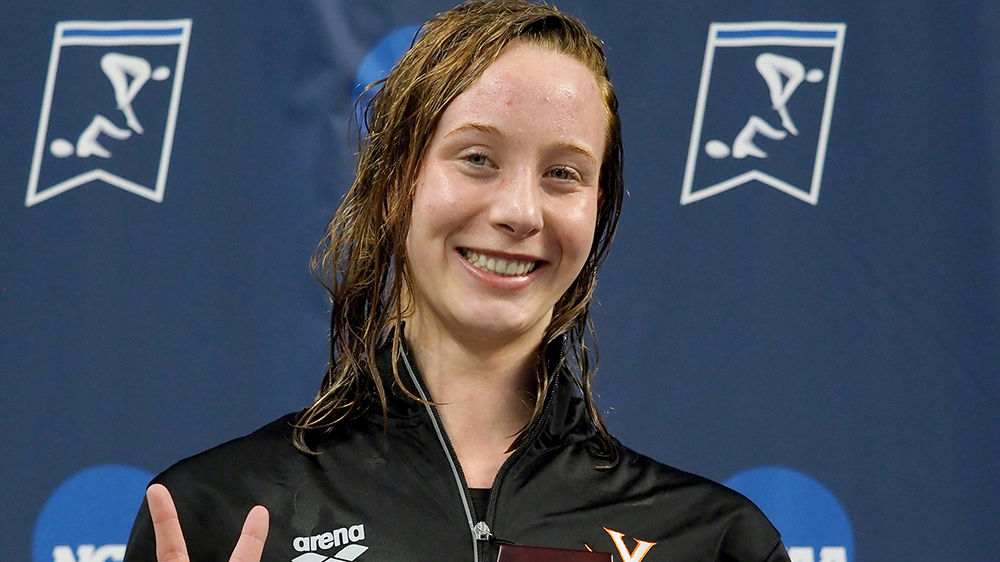 “We did [recruit her], but she wasn’t interested so we didn’t get very far with her,” DeSorbo noted.

Ironically, DeSorbo’s misfortune with the Wolfpack morphed into his good fortune when he was hired as Virginia’s head coach in August 2017. One of his prize recruits was Madden, who held seven Alabama high school state records.

“I think that the combination Virginia provides between elite academics and athletics were attractive to her,” DeSorbo said. “She’s very hard working and focused. She’s as good a student as she is an athlete.

“She wanted to go where she could accomplish what she wanted as an athlete and get one of the best educations in the country.”

Madden, who majors in kinesiology and minors in health and well-being, already has qualified for the ACC All-Academic Team. What she’s accomplished in the water has made waves:

“I think the team atmosphere was the main factor for me,” Madden said while explaining why she declined offers from North Carolina State, Georgia and Texas A&M. “The men’s and women’s teams get along quite well. The girls were tight, and there weren’t any cliques.

“Academics definitely were a factor. They’ve always been a huge part of my personality. I always wanted to be challenged. You can tell that people come to UVA for the university as a whole and academics are one factor.”

Madden has earned All-America honors in two freestyle events (the 200 and 500) and the 200 backstroke, and is proficient in the 200 butterfly. Being able to master three strokes has been a boost to her overall performance.

“Once you get a taste of the potential to be an Olympian, that gives you more drive. Those athletes are few and far between.”

“To be honest, training multiple strokes will help your primary stroke,” she said. “Freestyle has been my best stroke, but I practice other strokes. By not sticking to one stroke I’m able to be entertained and it keeps things fun.”

DeSorbo has his own theory on why Madden enrolled at Virginia and was able to score points in three strokes the first time she dived into a pool.

“I have to credit her club coaches from when she was a middle school swimmer,” he said. “They developed her in all strokes. She probably put a personal emphasis on developing all strokes.

Besides her assault on the UVA swimming record book, Madden was a two-time medalist at the 2019 World University games, earning gold in the 4×200 free relay and bronze in the 200 free. And she was a silver medalist at the 2019 U.S. Phillips 66 National Championships. During the winter break, she also recorded two top-five finishes at the Toyota U.S. Open Championships in Atlanta.

What Madden has accomplished in these meets has proven to be invaluable as far as DeSorbo is concerned.

“She came off a great NCAA season in her second year,” he said. “Her swim in the 500 freestyle [Madden placed second] gave her an enormous amount of confidence which carried over. Because of that, her confidence has snowballed.

“Her goals have continued to grow and grow because of those experiences she’s had over the past year.”

Madden is quick to credit the team’s strength coach, Jun Jeong, and her teammates, for her improvement.

“The aerobic training has made a huge difference in my aerobic capacity,” she said. “Getting to work with our strength coach has helped me work on areas that have been weaknesses of mine [like] strength and power.

“We have so many resources and I get to work with my teammates with the mental side of the sports as well as team camaraderie and helping to lift each other up.”

Not surprisingly, DeSorbo feels Madden has the ability to qualify for the U.S. Olympic Team.

“She’s talented and driven,” he said. “Once you get a taste of the potential to be an Olympian, that gives you more drive. Those athletes are few and far between.

“Once an athlete realizes they have the potential, everything becomes magnified for that individual. I think the goal and potential to make the Olympic team gives those individuals an added boost.”

Madden admits one of her goals is to qualify for the Olympic team. But it isn’t something she dwells on to the point where she’s overwhelmed.

“I think it’s not just one thing, but a day-to-day thing,” she said. “I try to take it one practice at a time. I set goals for myself each day. By hitting those little goals they’ll add up to a big end product.