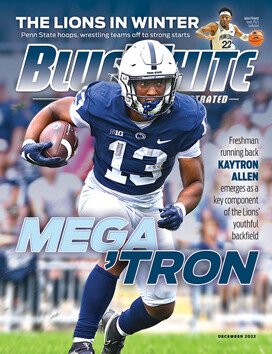 In the December edition of BWI, we take a closer look at Penn State's high-impact freshman backfield combo. Nicholas Singleton has gotten plenty of well-deserved buzz, but his classmate Kaytron Allen also came on strong in the second half of the regular season. We take a look at the effect they've had on Penn State's offense this year.

Also in this issue:

Subscribers to BWI Magazine will automatically get this with their subscription. Click here to start an annual Subscription!